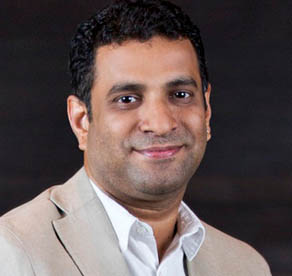 Mr. Jadhav has been in the business of building brands in consumer’s hearts for over 24 years. His passion for creative excellence, commitment to delivering business growth and a unique solution driven approach of an entrepreneur, makes Giri distinctive.

Giri has had two stints at Ogilvy across disciplines and offices. In his first stint, Giri held leadership responsibilities across disciplines - as Head of Ogilvy Actions he set new benchmarks in the industry and developed a highly profitable biz model that could be exported to the wider network. As Head of Ogilvy Mumbai (2005-08), his leadership saw the Mumbai office doubling revenue growth and also being voted as WPP's global office of the year in 2006.

In the summer of 2008, Giri moved to the Star TV network to drive the regional channel ambitions of India's largest TV network. He successfully launched two regional channels, which moved up to the No. 1 position in challenging market conditions.

Mr. Jadhav returned to Ogilvy for his second stint after a short and successful innings at Star TV in the fall of 2009. Moving in, to be the Regional Biz Leader Asia on Unilever based out of Singapore, he was responsible for the formation of the Singapore Unilever team hub, relocating and building a passionate team. His leadership drive resulted in the Hellmann's UFS Global new biz win for the agency and an integrated agency offer across markets in Asia.

He was then Chief Operating Officer for Singapore between 2012-14 – The most significant contribution in his stint as COO was to successfully restructure Ogilvy Singapore to a “Client Centric” Organization and jointly kick off a creative opportunity process based on the organization’s belief in pervasive creativity.

He then moved to regional role, as Vice President Asia, and as a member of the Ogilvy Asia Exco he was tasked with Agencies Top 50 clients in Asia and their revenue growth, playing a pivotal role in driving a change in employer behaviour and agencies approach through a transformational phase, Giri was also responsible for New Business in Asia and under his leadership the agency was rated #1 by Campaign Asia for 3 years running.

In his current role Giri is the Leader of the Advertising capability in ASIA and is the global lead on Cadbury & HALLS (Mondelez).